Now Rakhi will do justice on Imagine TV! 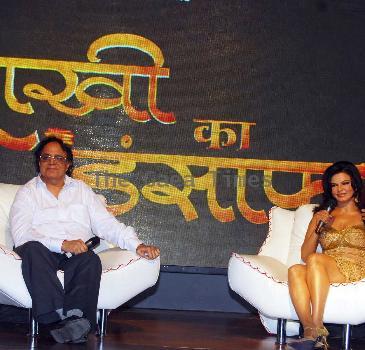 August 23, 2010 (Sampurn Wire): Imagine TV has always maintained a unique status in Indian Television by showing versatility in the reality shows they offer, like Swayamvar, Pati Patni Aur Woh, Desi Girl, Raaz Pichle Janam Ka and many more. Maintaining on to their status, Imagine TV brings you a brand new show named ‘Rakhi Ka Insaaf’. The name itself says it all. Yes!!! We are talking about the Princess of Reality Shows, ‘Rakhi Sawant’, she is back with a bang on television, she will be seen on a new reality show, which will be dealing with social issues, with out any legal involvements in it.

Sounds exciting, isn’t it! Rakhi Sawant will be seen solving all the cases, the last verdict on all these cases will be given by Rakhi Sawant. It will have no legal involvements.

Talking about the show and on choosing Rakhi Sawant to be an integral part of it, the producer of the show Moti Sagar says, “I always wanted a girl to be a part of this show, one who has faced the problems in reality. In my opinion, who has been through hard time, is the one who can do justice to the people who come on the show, and nobody fits the bill perfectly other than Rakhi.”

Rakhi commented, “Even though no one takes me seriously regarding my passion for social work, but through this show, people will get a chance to know me. I will only support the truth, be it a girl or boy, I will make sure my judgments are unbiased. Whatever decisions will be made, will be ‘dil se’, just as the title of the show says ‘Rakhi Ka Insaaf… Dil se’.

The show is yet to go on the floors, but if the sources are to be believed, then the show will be replacing the current show, ‘Meethi Choori No.1’ on Imagine TV!