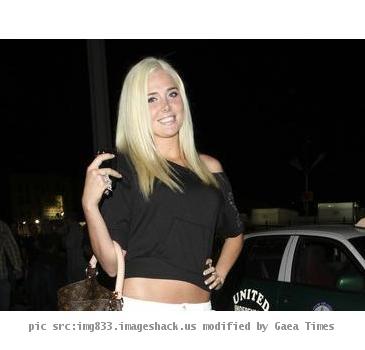 LOS ANGELES (GaeaTimes.com)- The American glamor model and Playboy Playmate Karissa Shannon has startled the world recently after she admitted that the controversial sex-tape of Heidi Montag features her. Previously the media reported that Heidi Montag’s husband, Spencer Pratt has threatened the former to release the tape if she doesn’t agree to do another reality series with him. The gossip websites report that Spencer Pratt is in talks with the adult video company Vivid Entertainment.

The controversial sex-tape shows Karissa Shannon and Heidi Montag sharing intimate moments, as media reports. Heidi Montag is presently upset about the news and she wrote on her social networking site that she is “crying”. The reality star seems really upset and in her social networking site she also asked her fans to support her in her bad phase of life. On the other hand the officials of Vivid Entertainment are excited about this new sex-tape. Vivid Entertainment’s co-chairman Steven Hirsch told a reputed media source that he had spoken with Spencer Pratt about the sex-tape with Heidi Montag and the company is still in the negotiations to possibly come to terms for the deal.

Karissa Shannon in her recent interview reportedly admitted that she filmed an intimate video with the former actress of reality series “Hills”. However, the Playboy Playmate has said that she is unsure if Spencer Pratt has that video with him in his collection. A gossip magazine reported that Karissa Shannon has joined Heidi Montag in threatening a lawsuit against Spencer Pratt, if he goes ahead with his plan to sell the tape. However, Heidi Montag has not commented anything about the recent sex-tape update with Karissa Shannon.