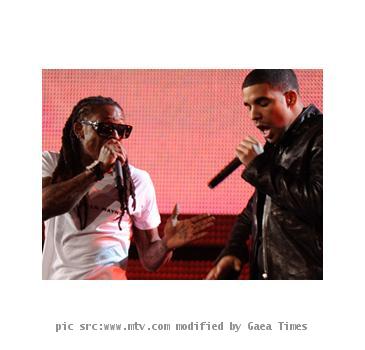 LOS ANGELES (GaeaTimes.com)- MTV premiered the new video of Drake called ‘Miss Me‘ on Thursday night, August 19 and the video has been a hot search on the web ever since. The video also features star rapper Lil Wayne and it blends violence and sexuality with smooth and yet disturbing visuals. Drake who is an upcoming star in the hip-hop industry revealed that he was very excited about the new video and felt that the video had a darker tone than the song itself. Lil Wayne and Drake’s Young Money family were also seen appearing for a shot while in the video. Drake has explained that the video gave him the opportunity to flex his muscles a bit.

In the video a hooded man is seen throwing a Molotov cocktail at a wall and there are also firecrackers bursting. The scenes are repeated in reverse motion as well. The next scenes show a sexily clad woman dancing in the room. Drake appears inside the room and then the woman is seen performing seductive dance moves in front of Drake. There is an undertone of violence with scenes showing walls going ablaze. Lil Wayne appears through a projection on the wall and then is seen inside the room within a TV set. The scantily clad woman who dances around Drake also a sense of mystery about her as face is rarely shown in the video. At the end of the ‘Miss Me‘ video, it is revealed that the hooded figure in the beginning was Drake himself.

The ‘Miss Me‘ video of Drake featuring Lil Wayne was directed by Anthony Mandler. He is also due to work with Drake for the upcoming video of ‘Show Me A Good Time’.