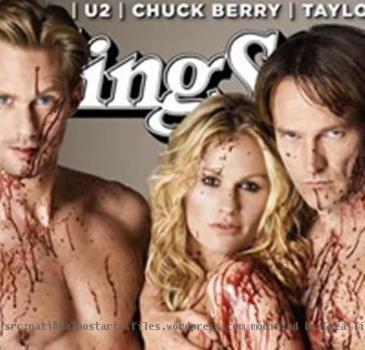 LOS ANGELES (GaeaTimes.com)- “True Blood” Rolling Stone cover has become one of the most searched items on web after they were leaked online. The magazine cover features Anna Paquin, Stephen Moyer and Alexander Skarsgard nude and dipping with blood. “True Blood” is one of the most popular American Vampire series created by Alan Ball and based on “The Southern Vampire Mysteries” by Charlaine Harris.

“True Blood” is known for unabashedly delving into a mix of blood, sex and violence and the Rolling Stone cover portrays the same image of the Vampire series. The creator Alan Ball in one of his interviews to the magazine said that for him vampire story means “sex” and he does not care about the high school students and their reaction to it. The creator compared his previous series “Six Feet Under” with “True Blood” and said that working on the former series was sometimes depressing but the for the latter it is different. The Rolling Stone magazine featuring the “True Blood” actors will hit the stores on September.

“True Blood” actors not only graced the Rolling Stone magazine cover but also they gave their interview about the series and its latest developments. The “True Blood” Rolling Stone cover revealed online also shows that the actors are called “hot”, “sexy” and “undead” in the cover text. The magazine cover received a mixed reaction from the viewers owing to its outrageous portrayal. The three actors are seen smeared with blood and Anna Paquin is seen standing with her back to Stephen Moyer as he holds her tight and facing Alexander Skarsgard who elevates her leg to his side.