‘Scott Pilgrim Vs The World’ Reviews Out Now 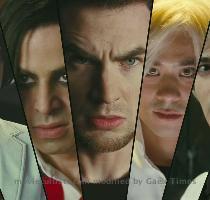 LOS ANGELES (GaeaTimes.com)- The much hyped ‘Scott Pilgrim vs The World‘ released on August 13 and the web is already abuzz with the reviews of the film. In spite of the mixed response given to the film by the critics, the film has been touted as the biggest nerd flick. The film was promoted heavily at the Comic-Con with most of the female stars making an appearance at the convention in San Diego. Based on the comic book series of the same name by Bryan Lee O’Malley, the story of ‘Scott Pilgrim vs The World’ deals with the character of Michael Sera who plays Scott Pilgrim. He is seen in a number of relationships and facing the hazardous consequences of each of them.

Ellen Wong, who plays the role of Knives Chow in the film appeared in an interview recently with another star, Mary Elizabeth Winstead who plays the role of Ramona and spoke about their roles in the film. Ellen Wong explained that the female characters in the film were not the typical wives or girlfriends in the films but dangerous and independent women with supernatural powers. ‘Scott Pilgrim vs The World‘ has combined the comic book style with the cutting edge graphics of today to make the comics come alive on the screen.

‘Scott Pilgrim vs The World‘ stars Michael Cera, Anna Kendrick and Mary Elizabeth Winstead among a few of the notable stars. It has been directed by Edgar Wright. The music for the film has been composed by Nigel Godrich and it has been shot primarily in Toronto.