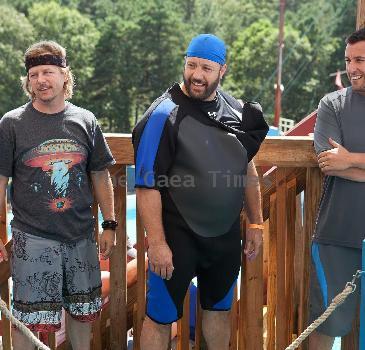 August 14, 2010 (Sampurn Wire): Lenny Feder (Adam Sandler) is a wildly successful Hollywood agent married to a fashion designer (Salma Hayek) and father to three bratty kids who spend all their time on tech devices. He is thrown together with five of his old high school basketball team following the death of their beloved coach. They haven’t seen each other for 30 years. Naturally all of them pretend to be flourishing except for Lenny who wants to downplay his wealth and the nanny they have to look after the kids. His buddies are Kevin James as a businessman, his wife (Maria Bello) who persists in breastfeeding their four-year-old son; Kurt (Chris Rock), a stay-at-home dad with a domineering wife (Maya Rudolph) and his mother-in-law (Ebony Jo-Ann) whose physical ailments are ridiculed; Rob (Rob Schneider), a health-conscious New Age devotee and his wife (Joyce Van Patten) who is much older than he is; and Marcus (David Spade), a witty singleton.

This Dennis Dugan directed sporadically funny comedy about a sad group of middle-agers who have built their lives on lies and fantasies that make them feel forever young is not as entertaining as you would expect it to be given the casting. All the sex jokes, farts, and bikini-clad young women cannot punch up what is essentially a chaotic tale of five friends who don’t want to ever grow up and face the unpleasant truth about themselves.

Nobody really acts here, they’re all doing cheap stand-up turns, and Dennis Dugan’s typically lackadaisical direction imposes no control on their excesses. Sandler just mopes through the picture, but he ungenerously gives himself the part of the one really successful member of the quintet, and also the one who’s wisest about how they all ought to live. The four other “stars” are one-note figures, and played that way. The women are even more sketchily drawn, reaching a low point in a scene at that unnecessary water park where they descend to “Sex and the City” level. And the youngsters are just convenient foils. But certainly the most embarrassing turns—despite the awful ones handed to Spade, Schneider, Bello, Hayak and Van Patten—go to prune-faced Quinn and particularly Steve Buscemi, whose cameo as one of his pals is the movie’s absolute nadir.

Avoid this one unless you have absolutely nothing else to do!