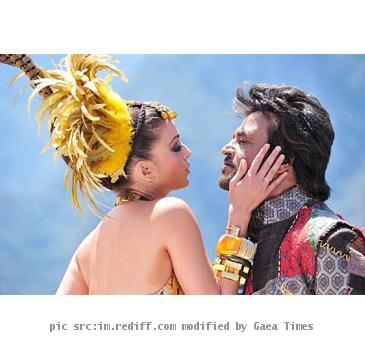 CHENNAI, TAMIL NADU (GaeaTimes.com) — Move over Arnold Schwarzenegger! Rajnikanth is back with Endhiran. Produced by Sun pictures this Shankar flick has a budget of a whooping Rs 200 Crores. And if any Indian superstar can justify that awesome budget it is surely the one and only Rajnikanth.

The trailer of his new movie also starring Aishwarya Rai Bacchan
was released recently. From the first look this can be one of the biggest and the most spectacular action films to have been made in India. In the first real look into the film we can see that the special effects in this movie can compare to any Hollywood release. Rajnikanth plays a dual role one of the robot and the other of the scientist that creates him.

This film will release in more than 300 screens outside India and more than 2000 prints will be released in India. All we can say is Rajni mania is back! Watch the full Endhiran trailer and share your views.