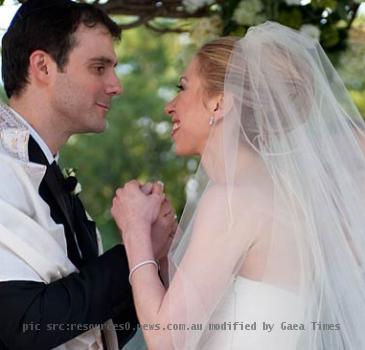 RHINEBECK (GaeaTimes.com)- Former first daughter Chelsea Clinton tied the knot with her longtime boyfriend Marc Mezvinksy in what was being pitched as the ‘royal wedding‘ of United States. The 30-year-old daughter of former President Bill Clinton and Secretary of State Hillary Clinton married the love of her life in a gala ceremony that took place at an exclusive estate along the Hudson River outside New York. An estimated family members and friends of the Clinton family attended the wedding which was held at the 50-acre estate in Astor Courts in Rhinebeck, New York.

Chelsea Clinton’s wedding finally brought an end to the secretive build-up that had reached its zenith about the wedding of the former first daughter. The interfaith wedding ceremony was conducted by Rabbi James Ponet as well as Rev. William Shillady given the fact that the bride is Methodist while the groom is a Jewish. Apart from the star-studded guest list which included the likes of Mary Steenburgen, Ted Danson along with other congressman as well as Democrats, large number of well-wishers of the newly-weds also thronged the picturesque town of Rhinebeck with the aim of catching a glimpse of the newly-married couple as well as the other celebrities who graced the occasion.

The wedding of Chelsea Clinton had managed to create so much hype mainly owing to the secrecy surrounding the occasion, that press from all across the world landed in Rhinebeck to provide their viewers with the latest updates about the ‘wedding of the century.’ Chelsea Clinton, 30 met 31-year-old Marc Mezvinksy at a conference way back in 1993 but their friendship turned into romance in 2005.