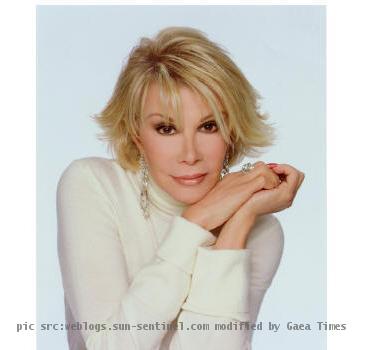 LOS ANGELES (GaeaTimes.com) — Relentless drive, switchball wit, ever-shimmering insecurity, anger, lust for attention and a lifestyle that can bankrupt an oil Sheik - all these are a part of the new documentary called “Joan Rivers: A Piece of Work”. It is a hilarious and unsettling journey centered around the multifaceted glory of a compulsive celebrity.

The film starts with the scene where Joan is seen without any makeup. Later on she paints her face with perfect intensity to show us the familiar face we are acquainted with. Director Ricki Stern and Annie Sundberg devoted a year (2009) behind this veteran comic. The film even has a part where Joan is seen thumbing through her appointment book. But the book is full of empty pages, which means no money.The movie even signifies yet another step towards obscurity for this women who was once the star guest on “The Tonight Show”. The key word in the movie is “work”. And Joan thinks that if she isn’t out there making somebody laugh, she no longer exists.

There are also some scenes from the past TV appearances as a part of nostalgia. It also shows how Joans think that comedy can get us through the worst of life and no subject is off limit for her. Known for her cosmetic surgeries, this 75 year old lady is seen rehearsing her play with her features puffy and red from Botox injections.

The film might look like the raving of an arrogant has-been, but rivers sell the sentiment with aplomb. The comedy and brazenness is just part of the package. And end of the day, the only thing that flows throughout the movie is her own comment- “You don’t have to think I’m beautiful. Just acknowledge that I’m a great comedian.”