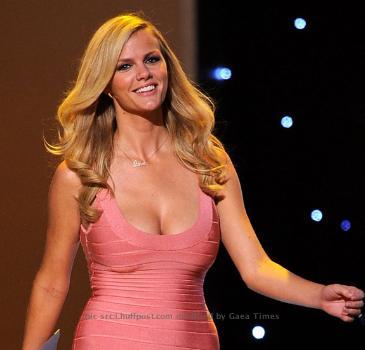 LOS ANGELES (GaeaTimes.com)- Brooklyn Decker, the highly acclaimed American fashion model became the talk of the town after she attended the ESPY Awards which was held in Los Angeles on Wednesday night. The ravishing model who is married to pro tennis star Andy Roddick looked spectacular in a Herve Leger dress that she chose to wear for the evening. However, the ace tennis star did not accompany his gorgeous wife for the star-studded award ceremony held last night.

23-year-old Brooklyn Decker surely left her large number of male fans asking for more as she adorned the body-hugging, knee-length pink outfit that was more than successful in accentuating her curves. Although the event also witnessed the presence of a host of other celebrities, the Sports Illustrated swimsuit model was surely among the ones who was successful in dazzling the red carpet and playing a pivotal role in enhancing the glamor quotient of the event. Meanwhile, the noted fashion model and actress is also making headlines lately for her upcoming flick, “Just Go With It” which also stars Jennifer Aniston and Adam Sandler. It has been reported that the filming of the forthcoming movie is almost over and it would be released early next year.

Apart from Brooklyn Decker, the other celebrities who created a stir in the ESPY Awards were “Twilight” star Ashley Greene who chose to wear a red halter-neck dress while reality television star Kendra Wilkinson looked gorgeous in a short black outfit. Marisa Miller adorned a cut-out black dress for the evening while Olympic softball champion Jennie Finch decided to go with a glamorous black short dress.