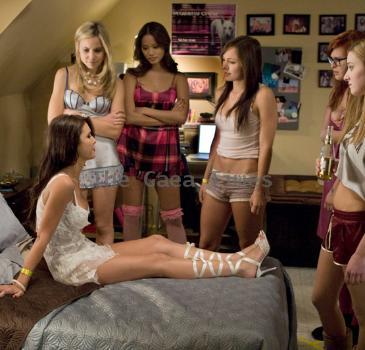 July 10, 2010 (Sampurn Wire): This remake of the 1983 cult classic The House On Sorority Row marks a welcome return to the good old slasher days of the 1990s, boasting that tried and trusted plot of beautiful people hiding a deep dark secret and getting hunted down by a mysterious killer.

The movie opens as the exclusive Theta Pi sorority throws its annual freshman pledge night, a heady evening of sex, drugs, alcohol and impossibly attractive people. Away from the action, Queen Bee Jessica (Pipes) and her posse have masterminded a cruel prank against Megan’s (Patridge) cheating boyfriend. Leading the gullible Garret (Matt O’Leary) to slip Megan a "date rape drug", the wronged woman pretends to die, leading the sorority sisters to accuse Garret of killing her. They convince him to help them dump her body at an abandoned mine (conveniently located nearby), but before the prank can be revealed, a shock twist leaves Megan dead for real. Terrified about their future and goaded by Jessica, the girls decide to dump Megan’s body in the mine and get on with their lives. But, as in all good horror yarns, the past can’t stay hidden forever, and seven months later the sisters realise that somebody else knows what happened that night.

While proceedings start in a predictable enough manner - beautiful people clad in lingerie unaware of a killer in their midst; protagonists making ridiculous decisions etc. - Sorority Row manages to remain both fresh and watchable despite a handful of rather obvious plot turns. Unlike many of its predecessors, a lull in deaths after the initial killing allows time for the main characters to develop, meaning that you genuinely care (or don’t) about their fate. The mainly female cast also provides a welcome change from the ‘damsel in distress’ mould commonly favoured by the genre, and here it is the men who are painted as drunken idiots or sensitive sidekicks. However, the biggest surprise is how genuinely and intentionally funny the dialogue can be.

Casting of the mostly female star cast is in tune with genre of the film and their acting quiet surprisingly impressive. Watch this one if you have nothing else to do.