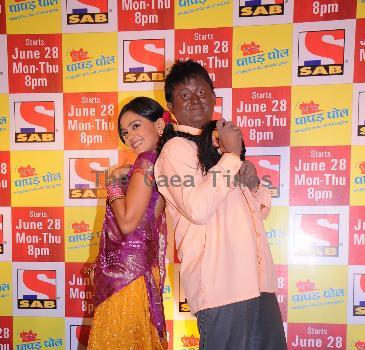 July 10, 2010 (Sampurn Wire):A black protagonist always appeals to couch potatoes. It doesn’t matter whether you’re a sobbing Ragini, Saloni, or a day dreamer in Vinaychand (Swapnil Joshi). If you’re black, viewers shall bow before you.

SAB TV is currently gaining the benefits of having its first dark skinned protagonist in the form of Vinaychand. ‘Papad Pol – Shahbuddin Rahtod Ki Rangeen Duniya’, drew an impressive TVR of 1.9 in its inaugural episode on June 28. This number is impressive for a middle-rung channel like SAB. It’s even more impressive considering the fact that the channel never achieved such numbers and this 1.9 is better than 1.8 of ‘Chaand Chuppa Badal Mein’ that was launched on the same day on the premier channel Star Plus.

Though ‘Papad Pol’ saw a drop vis-à-vis ‘Chaand…’ in the next three days, SAB will still take heart from the fact that another of their show crossed the 1 TVR mark.

SAB EVP and business head Anooj Kapoor said, “Since the last five weeks SAB TV has consolidated its position beyond the 100 GRP mark. Our new show ‘Papad Pol – Shahbuddin Rathod Ki Rangeen Duniya’ has got a tremendous opening across HSM and also has outnumbered ‘Chand Chupa Badal Mein’ launched by Star plus on the same slot. This in itself is a huge achievement. We are soon going to launch another comedy show ‘Malegaon Ka Chintu’ and also a comedy detective show which will propel our growth further”.

What is more heartening for Kapoor is that the channel has grossed 100 GRP mark for the second time in its history. Once again, it was ‘Taarak Mehta Ka Ooltah Chashmah’ that drove the channel to an all time high of 10 GRPs. The Neela Telefilms show clocked a peak TVR of 3.7. SAB has now opened a gap of 19 GRPs over its nearest rival Imagine TV, whose top rated programme ‘Bandini’ drew just 1.4 TVR.

The battle might be much closer next week, when the rating of ‘Desi Girl’ grand finale will be out. However, the show has failed to garner a TVR of even 1 in Friday or Saturday’s episode. Imagine now will be banking on the R. Madhvan hosted ‘Big Money’ that premiers on July 10.