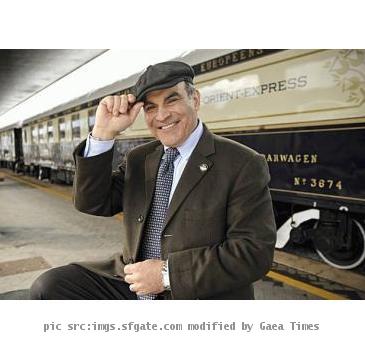 LOS ANGELES (GaeaTimes.com)- All the fans of the highly acclaimed British actor David Suchet has something to look forward on Wednesday night when PBS aired the documentary and travelogue “David Suchet on the Orient Express: A Masterpiece Special.” The program which was broadcast on the channel last night was surely a huge treat for any one who loves to travel and wished to gather information about the illustrious train.

Anticipation about the documentary “David Suchet on the Orient Express” has been immensely high among the viewers, first of all because it indeed was a unique travelogue which provided them the opportunity to know more about the luxury train and secondly, because it created extensive hype for David Suchet’s return on Sunday in PBS’s take on Agatha Christie’s “Murder on the Orient Express.” The documentary that was aired last night on PBS gave a preview of the new adaptation of one of the best known mysteries of Agatha Christie which is scheduled to be aired on Sunday in which David Suchet returns to adorn one of his most famous role of detective Hercule Poirot.

Meanwhile, one of the high points of the documentary “David Suchet on the Orient Express” turns out to be the revealing insights about the artistry and beauty of the iconic train while exploring the reasons which propelled Agatha Christie to use it as the setting in one of her most popular novels. At the same time, as David Suchet made his journey across Europe in the historical Orient Express, the viewers were also able to garner information about the past of the iconic train and how it continues to live in the pages of history.