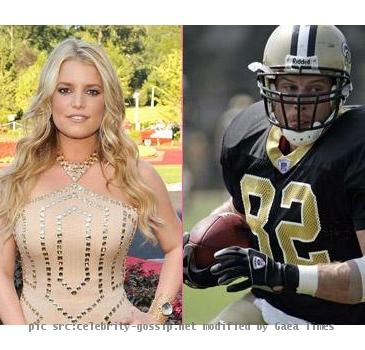 LOS ANGELES (GaeaTimes.com)- Former football player Eric Johnson is reported to be the new man in Jessica Simpson’s life. A leading news website recently reported that the much acclaimed singer is dating the ex football player who is known to have been associated with the San Francisco 49ers. Although any official confirmation about the romance between the two has not been forthcoming as yet, one thing is for sure that Jessica Simpson’s affinity for football player’s does not seem to have ended even after her much publicized affair with Dallas Cowboys quarterback ended quite unpleasantly.

The rumors of the “Employee of the Month” actress’ romance with Eric Johnson is creating quite a stir after a source close to the supposedly revealed to a news source that the couple were indeed ‘very happy’ with each other after they started going around since the month of May this year. Jessica Simpson grabbed many eyeballs with her appearance in the MTV reality show “Newlyweds: Nick and Jessica” with her the then husband Nick Lachey. However, they divorced in 2006 and since then the actress has been dating singer John Mayer followed by her two year romance with Tony Romo which ended after she was believed to be a jinx due to the player’s poor performances. Meanwhile, Eric Johnson separated from his wife earlier this year and later filed for divorce.

Despite the fact that the 29 year old actress has not confirmed whether she is actually romantically involved with Eric Johnson, all her fans are surely hoping that the “The Price of Beauty” star gets lucky with love at least this time around.