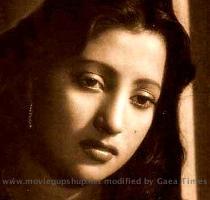 KOLKATA, INDIA (GaeaTimes.com)- Yesteryear screen icon Suchitra Sen who was admitted in the hospital complaining a lung infection is on her way to recovery. Reportedly, Suchitra Sen has been declared stable after her antibiotics steroid treatment.

Suchitra Sen turned 79 just three months back and since then she had been under constant medical supervision owing to her respiratory problems. It was on June 20 when her condition worsened and she was admitted in the Intensive Therapy Unit of Belle Vue Clinic in south Kolkata. Critical care expert Subrata Maitra is looking after Suchitra Sen and told the media that Suchitra Sen had been suffering from severe infection in her lungs and was subjected to a mixture of steroids and antibiotic treatment. Suchitra Sen was also on nebulisation and had to breathe for a few days through inhaler. Suchitra Sen’s granddaughter and Bollywood actress Raima Sen paid a visit on Thursday afternoon and informed the media that her grandmother is doing fine and they hope to take her back home in a few days.

The doctors further informed that Suchitra Sen’s lungs have been severely affected by cold and when she came in she was running a high temperature. The situation worsened when the blood oxygen level went down to 60 percent which is way below the normal 90 percent. Suchitra Sen and her family members have maintained a high level of secrecy as she was brought through the back door of the hospital. Suchitra Sen has been shifted to a corner room in the ITU of the hospital and a couple of security guards are watching the door.

NOIDA - A private bus rammed into a cycle rickshaw here Friday, killing the rickshaw puller and a 15...

NEW DELHI - The Cycling Federation of India (CFI) Monday announced a 15-member squad for next month'...

KOLKATA - A Maoist squad leader has been arrested from West Midnapore district of West Bengal, polic...

NEW DELHI - Following is the schedule of the Commonwealth Games events for Sunday. Total thirt...

KOLKATA - Actress Raima Sen, who has made a name for herself in the Bengali film industry as wel...

KOLKATA - Bollywood actress Raima Sen feels that everyone should respect the privacy of her gran...

NEW DELHI - The Cycle Federation of India (CFI) Friday announced a 27-member squad for the Commonwea...
Copyright© 2010 The Gaea Times