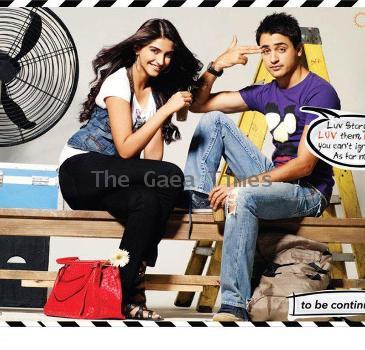 I Hate Luv Storys: Fun Till It Lasts

July 2, 2010 (Sampurn Wire): Boy hates mushy love stories, doesn’t believe in love and all those things that come along with it whereas the girl is a big believer in romance and is living her own perfect love story with a childhood pal. Boy meets this girl and don’t get along but eventually love strikes! First for the girl but the boy rejects it explaining that he only thought of her as a friend. Soon love strikes him too but by then it is too late. He tries to woo her back and ends up doing all those mushy things that he hated in the first place. Punit Malhotra’s debut directorial venture, I Hate Luv Storys works well when it tries to poke fun at these elements but eventually falls in the same clichéd trap when it comes to delivering as a film.

I Hate Luv Storys’ main lead character, J (Imran Khan) tries to poke fun of all the mush and romance ideas that generate from Bollywood. Ironically, working with Bollywood’s King of mush, filmmaker Veer Kapoor, he barely manages to keep a straight face about all that’s happening around him. A complete opposite of J, Simran (Sonam) joins Veer Kapoor’s production as a set designer. As expected clashes take place between the two but eventually they end up becoming good friends. Gradually she ends up falling for, Mr. Wrong at the risk of dumping her loyal perfect Mr. Right Raj (Sammir). J rebuffs her. Hurt, she tries to get over her fixation for J and decides to concentrate on her relationship with Raj. But by then J has fallen head over heels in love with Simran and wants her back. How he tries to use all the tricks from the clichéd Bollywood references and much more to woo Simran back, forms the rest of the film.

First timer, Punit delivers big when it comes to giving the film a fresh treatment in terms of narrative and style and laces it with some extremely laugh out loud one liners. But as a writer, he falls short of offering anything new when it comes to the script. Agreed, it tries to take a funny look at the romance seen through the typical eyes of Bollywood, by doing a parody of sorts on filmmakers. He includes his own producer Karan Johar, Sanjay Leela Bhansali and even Aditya Chopra in it but one fails to understand why Punit doesn’t give a new perspective about the same in his own film given the resources he had in hand.

The jovial first half has its moments but the second half tends to drag, especially since you can predict well in advance how and where it is all heading. But, full marks to his actors including the periphery ones, who keep it rocking with their perfect acts. Vishal and Shekhar’s chart topping music also aids IHLS and lifts it above the average. The innovative production design works well with the theme of the film. Ayananka Bose continues to surprise with camerawork with each passing film. She has captured the New Zealand locales superbly.

Imran Khan, after a lackluster performances in Kidnap and Luck is back in top form and very much at ease playing a rom com lead. He adds more fun to his character with his body language and facial expressions. Sonam Kapoor is aptly cast as the dreamy lover girl and wows in her more contemporary city gal avatar unlike her first two films Saawariya and Delhi 6 which presented her in a more ethnic way. The chemistry between this fresh pairing is amazing. Kavin Dave as Imran’s office colleague is hilariously good. The graffiti on his Tees make you LOL as well. Sammir Dattani delivers his lines monotonously. Perhaps he was asked to appear as a boring boy friend. But he does it well. Sameer Soni is fun with his take on Karan Johar and so is Aamir Ali as the hot shot romantic star of the film he is shooting. Bruna Abdullah is smoking hot in her special appearance as Imran’s flirt interest.

IHLS is fun till it lasts but once you come out of the cinema hall you realize that it fails to make an impact as a romantic comedy thanks to the feeling of déjà vu. IHLS works as pure popcorn fun.