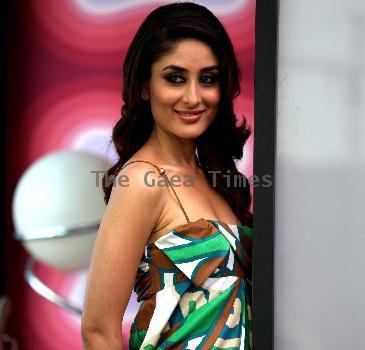 July 2, 2010 (Sampurn Wire): For those who thought that the stunning Kareena Kapoor keeps away from food to maintain her famous size zero figure –think again!

The Czarina of Bollywood who is currently in Hyderabad shooting for Rohit Shetty’s Golmaal 3 has taken a break from her diet to freak out on the local biryani that topped on her crave list.

Reveals a source “ Post pack up, Kareena would call for the typical Hyderabadi Biryani. She didn’t compromise on her yoga sessions but did gorge on delicious food. Kareena is a true blooded Kapoor after all!

Kashyap upsets Boonsak to sail into quarters in Denmark

Sania says she is close to her best

Cricket: India happy to restrict Aussies on day one

BANGALORE - A confident India were more than happy to restrict the Australian run machine to 285 for...

Gagan Narang: A world champ in the making

NEW DELHI - Gagan Narang had taken to shooting as a pastime, not in pursuit of excellence. Now, afte...

NEW DELHI - Riding on the shooters and wrestlers, India's gold kitty at the Commonwealth Games swell...

It is all in the mind for Gagan Narang

MOHALI - India Tuesday pulled off a cliff-hanger against Australia in the first Test with the fortun...
Copyright© 2010 The Gaea Times