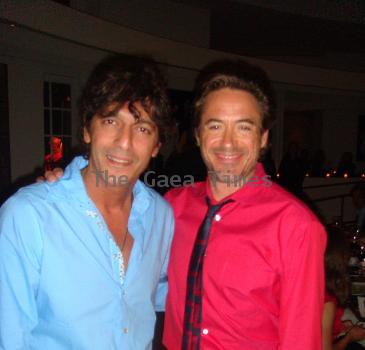 June 28, 2010 (Sampurn Wire): On his recent stay at the famous hotel Beverly Wilshire (better known as the hotel where Pretty Woman was shot) Chunky Panday and his wife were asked to be ready for a surprise dinner guest at their table, by the GM of the hotel. The dinner turned out to be truly special as their guest for the evening was none other than the Hollywood hot star, Robert Downey Junior!

Robert and Chunky were both part of an exclusive dinner organized to showcase the work of a famous artist. The two actors from across the globe immediately connected and the ice breaker was the pair of sun glasses that Robert put down on the table. As it turns out that both Chunky and Robert share a common love for shades and have hundreds of them in their collection. By the end of the evening Robert even offered his sunglasses to Chunky! But a well timed nudge from his wife Bhavana made sure that Chunky refused the offer politely, even though he loved the glasses.

Robert was very amused to know how his popularity had increased across the Indian subcontinent post the release of his last 2 blockbusters Iron Man 2 and Sherlok Holmes. In fact, he told Chunky that people have told him that Sherlock Holmes seemed like a Bollywood film. He went on to admit that “India was a land waiting to happen” for him and he would love to visit soon. When Chunky asked him if he would be open to doing Hindi films, he immediately countered with a question “and would you like to do Hollywood films?”

WELLINGTON - Lady Gaga and her beau Luc Carl have apparently taken their "first step towards marriag...

Baring all for 'Man from Banaras' was challenging: Ravi Kishan

MUMBAI, INDIA (GaeaTimes.com) -- Navratri is the festival that redefines colors and bring happin...

Mahima, Chunkey to dig into past lives on reality show

Bigg Boss 4 gang gets into the house on October 2nd