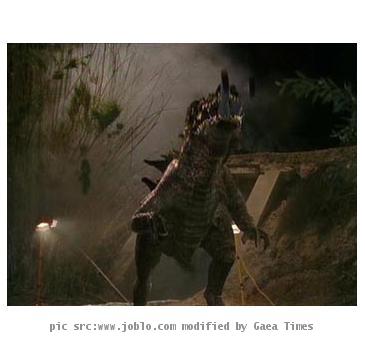 LOS ANGELES (GaeaTimes.com)- The viewers of Syfy network are familiar with the monster movies shown exclusively for the channel from time to time and a section of people actually enjoy watching these CGI flicks made on a tight budget. They are best meant for a weekend watch to de-stress. Last night, one such movie named “Dinocroc Vs. Supergator” was shown on the network which was watched by a large number of viewers.

The film did not have anything significantly different to offer from other monster movies except a top notch actor like the late David Carradine. The ‘Kill Bill’ star essays the role of millionaire Jason Drake with aplomb, a man obsessed with creating giant sized reptiles with help of genetic engineering at a remote tropical island. As is the case with these monster movies, the experiment goes wrong and two giant sized creatures namely the Supergator and Dinocroc get free and engage in mass skilling of humans.

Interestingly Jason Drake who is the mastermind behind the creation of the monster duo in “Dinocroc Vs. Supergator” never appears with them in the same frame throughout the movie. However, the acting of David Carradine is what elevates the movie to a large extent as many feel that the rest of the actors put in mediocre performances. The chase sequences resemble those that have been witnessed numerous times in classic films like “Jurassic Park” or yesteryears flicks like “Jaws”. “Dinocroc Vs. Supergator” is fast paced and this is what helps to keep the viewers glued to their seat till the end. Overall it is pretty much like other Syfy monster flicks.