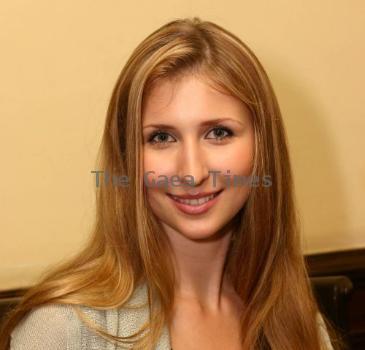 June 19, 2010 (Sampurn Wire): Everyone following the third season of Bigg Boss must remember the German model and actress Claudia Ciesla, who added the much needed spice to the show in Colors channel. The hot actress is now going to debut in Kannada films with the movie Private Number. Claudia has already made her debut in the Hindi movie ‘Karma’.

Claudia is now staying at Bangalore to shoot for her first Kannada movie. The shooting is going on at Innovative Film City near Bidadi here, and the lady is enjoying every bit of acting in the film.

According to Claudia, she has taken acting very seriously. She came to know that the 100 films are produced every year in the Kannada film industry so she is very happy to be a part of it. She wants to work very sincerely in the industry as she loved the country, its culture, history and the people.

Miss Claudia is hoping to make her career in the Kannada industry with more remarkable roles.

Private Number is a thriller and is about the changes in one of the protagonists’ life after receiving a call from a private number.

Claudia will be seen as the best friend of the heroine. In real life, Claudia has made director Anand Kumar’s wife her best friend in Bangalore.

Currently, the songs of the films are being shot in Bangaore. Now, the ‘Malay banthu malay mellane’ number is being picturised on hero Preethan and the heroine Niharika, the dance of which is directed by Lakshmi Ayyar. Ramnarayan has penned the lyrics of the song.

Another song ‘Johnny Walker sightnalli bindaas moodinalli silence beda’, has already been shot with the actors Sharan, Chidanand, and Shreelakshmi. It was shot at a club on Residency Road.

Claudia said that her dream role will be acting with Aamir. She also wants to work with Salman Khan. She got acting tips from Sunil Shetty and Akshay Kumar, when they came to the Bigg Boss house during her stay there. So, she wishes to be paired with them too.

All the best Claudia, we hope your work is appreciated in the Kannada industry!