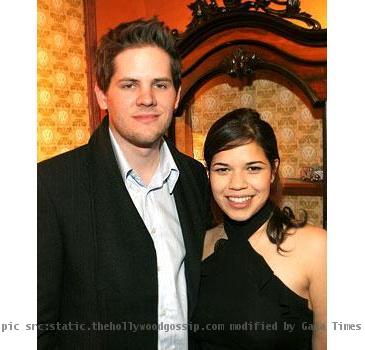 LOS ANGELES (GaeaTimes.com)- Ryan Piers Williams and America Ferrara are finally engaged to each other. America Ferrera’s publicist Carrie Byalick confirmed this news without any adding more details about it. The “Ugly Betty” fame America Ferrera attended the Edinburgh Film Festival for the screening of “The Illusionist in Scotland” on Wednesday where everybody saw her diamond engagement ring from her fiance Ryan Piers Williams. The lady seemed happy while she was attending the gala event and reportedly even flaunted her engagement ring.

Ryan Piers Williams and America Ferrera met each other at University of Southern California when Ryan Piers Williams cast her in his student film and the couple started dating since then. Ryan Piers Williams is an aspiring director presently working for Hollywood producer Steven Soderburgh. He directed movies like “Muertas” which is shot in El Paso Texas and also two short films like “The Flood” and “Confine”. America Ferrera won the Emmy Award, The Golden Globe Award, and a Screen Actors Guild Award for her role as Betty Suarez with braces on ABC’s “Ugly Betty” which ended last year after its fourth season.

Ryan Piers Williams has written and directed a film “The Dry Island” starring America Ferrera and she was promoting her film in Scotland. America Ferrera apart from her role in “Ugly Betty” has done movies like “Our Family Wedding”, “Real Woman Have Curves”, “Sisterhood of the Traveling Pants” and lent her voice in “How To Train A Dragon.” The couple has not yet announced their date of marriage. However, her fans are hoping that the 26 years old actress and her boyfriend Ryan Piers Williams, 29 will tie the knot soon.