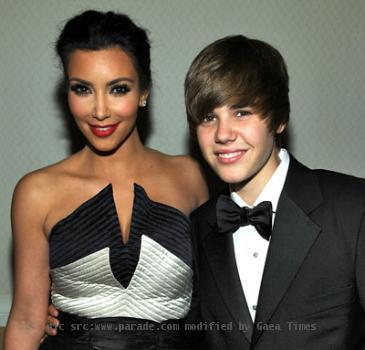 LOS ANGELES (GaeaTimes.com)- Justin Bieber has found himself again amidst a new controversy that involves Kim Kardashian. The latest rumour added to the list of the rumours surrounding Justin Bieber is of a hotel tape that has Kim Kardashian and Justin Bieber. The duo became a hot search on the web after the rumours surfaced but very soon the fans understood their baselessness. It is, however, reported that Kim Kardashian and Justin Bieber did take a trip together to a hotel for some business purpose. They were also spotted together at a beach and the photographs spread like wildfire on the web along with the rumours. It was no time that the rumours gained momentum and the hotel trip became a great opportunity to morph the circulating rumour into one involving a hotel sex-tape.

Justin Bieber rumours have become a regular on the hot searches list after reports of his death, his suicide, his arrest and his broken neck started surfacing. The often obscene and ridiculous rumours are no longer a shocker for the fans of the ‘Baby’ star. The Kim Kardashian involving sex-tape is the fourth rumour in the month and the earlier ones saw Justin Bieber acquire syphilis, foul mouth someone and then bribe Chris Johnson to cover up for the syphilis. The victim of cyber-bullying has found himself helpless against the vicious rumours that are aimed to hamper his extremely successful singing career.

Kim Kardashian has however been involved in a real sex-tape scandal around a year ago. Her association with Justin Bieber started after she posed for a photograph with a T-shirt that had Justin Bieber’s name printed across it. She has, reportedly, received hundreds of hate-mails from the fans of the teenage pop sensation.

Kardashian's dilemma over her assets

LONDON - Socialite Kim Kardashian reveals she used to be in a dilemma over the size of her assets. ...

NEW YORK - Sister of Kim Kardashian, Kourtney, is all set to make her acting debut - she has ...