Dharmendra Bowled Over By Betis Confidence: Shooting With Esha Was A Very Emotional Experience 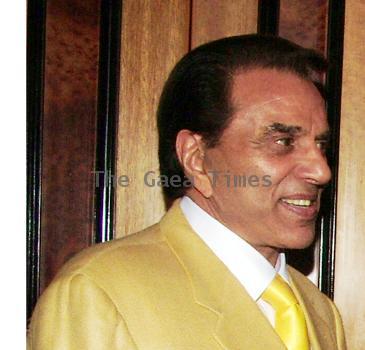 June 7, 2010 (Sampurn Wire): Dharmendra has just finished shooting with his daughter Esha Deol in Hema Malini’s home production which is a first for him. The movie is titled Tell Me Oh Khuda and he just can’t stop marveling at her confidence level in front of the camera.

Dharamji, who went straight from shooting with his daughter in Goa to shooting with his two sons Sunny and Bobby in Indore, recalls how intimidated Sunny was when he had to share screen space with his imposing father in Sultanat.

Esha, on the other hand showed absolutely no fear or nervousness in being seen with her legendary father.

Dharmendra saw his daughter act for the first time. And so impressed is he that he now wants to produce a film for her.

Says the emotional father, “Working with one’s children is always an emotional experience. Shooting with Esha was doubly emotional for me since this was the very first time I saw her acting, and that too with me.”

Dharmendra says he couldn’t say no to the offer which required him to work with Esha. “I did it for her. One can never say no to one’s children. Esha is very gifted. I felt very proud watching her in front of the camera. I also got a chance to meet up with my colleagues Rishi(Kapoor) and Vinod(Khanna) after a long time. So Goa proved to be very enjoyable.”

While working with Esha for the first time was a breeze, working with Hema Malini again after so many years, seems to make the Jat superstar uncomfortable. There’s a role in Tell Me Oh Khuda of Esha’s mom which the daughter is very keen to do.

Dharamji is not too sure of how the audiences would accept the golden couple of the 1970s and 80s who were last seen together in Jaan Hatheli Pe, 22 years ago.

Says Dharmendra shyly, “There’s a role for her. Let’s see if she does it or not. If people want to see us together again, it would have to be that way.”

CHANDIGARH - Indian passengers of Pan Am World Airways flight 73, which was hijacked at Karachi en r...

NEW DELHI - Strict monitoring of noise and air pollution will be done this Diwali, with the Delhi go...

RANCHI - India's medal-winning archers at the Commonwealth Games were accorded a warm welcome on the...

NEW DELHI - Indian Railways sportspersons bagged 13 of the 38 gold medals won by India in the Common...