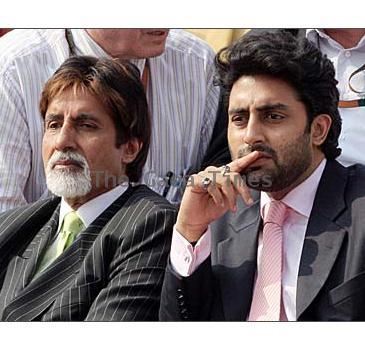 June 4, 2010 (Sampurn Wire): Fathers play an important role in every individual’s life; they shape us, mold us and definitely help us to be a better and stronger person. The same affection can be seen in Bollywood too as several star sons and fathers have made and still make up a dynamic duo in this industry.

Over the years, we have seen many a father and son pair entertaining us with their magical charms which look quite alluring on screen, with a chemistry that is not found in the hot couples here. It’s more interesting to see different generations collaborating on a common project.

The Kapoor family known as “the first family of Bollywood” has seen four generations of such actors. Carrying on the glory of Prithivi Raj Kapoor, his son Raj Kapoor launched his son Rishi Kapoor as the lead hero in Bobby opposite Dimple Kapadia.

The most memorable pairing of the father son in the Kapoor family was in the 1971 film Kal Aaj Aur Kal. Here, the three generations of the family acted together with Prithvi, Raj and Randhir Kapoor depicting key roles. This was also the debut movie of Randhir, who was launched by his father Raj Kapoor.

Now, coming to the present times, the most lovable father son duo is our own Big B and his son Abhishek Bachchan, who have starred in four movies together so far. Paa, being the latest one, where the roles were reversed. The movie received many critical acclaims for their unmatchable chemistry. The powerful acting and the magnetic persona of both the actors never fails to impress the critics as well as the endless Bachchan fans. Both of them offer 6 feet something of delight. We hope that they join forces and continue to spin such magical movies in the years to come.

The Deol brothers had their fair share of acting with proud papa and veteran actor Dharmendra. Three of them had starred in Apne, which could not wow the audience but their chemistry was noteworthy nonetheless.

Another very talented actor Sanjay Dutt, son of late Sunil Dutt, got just one chance to share screen with his legendary father. In Munna Bhai MBBS, the duo shared a few minutes on the screen but those moments were so touching because their off-screen affection got reflected beautifully here.

Although, some of the father-son pairs have been able to rock the box office but there are other pairs, who failed to recreate the on screen magic even after repeated attempts. Take the example of the late Feroze Khan and his dearest son Fardeen Khan, who have acted in two movies Janasheen and Ek Khiladi Ek Haseena. Both flopped at the box office. Unfortunately, the legendary actor Feroz Khan passed away in 2009 before they could have another shot at it.

However, lady luck seems to have smiled upon Hrithik Roshan and his papa dearest Rakesh Roshan. The senior Roshan launched his talented son with the record breaking movie Kaho na pyar hai, although they have not yet shared the same screen together. Since then, Hrithik has acted in almost all films made by his father like Koi Mil Gaya, Krrish and the recently released Kites with all of them going down well with the audiences. But, the audience would wait to see them coming together onscreen as well.

Now, the latest on the news front is that the Bollywood hunk Shahid Kapoor is all set to star in his father Pankaj Kapoor’s directorial debut Mausam. Although the movie is being kept under wraps , rumor has it that he is fully concentrating on his dad’s project now. He isn’t signing any other films either. As interesting as it sounds, we hope that the film offers us some amazing moments and manages to mark a lifelong collaboration between the two.

In the coming days, we would love to see Ranbir Kapoor and Rishi Kapoor carrying forward the legend of the Kapoor family. Hope the filmmakers are listening!

NEW DELHI - India and Sri Lanka are likely to launch a defence dialogue next year in the backdrop of...

LONDON - Coach Arsene Wenger has vowed to give "every drop of his blood" to make Arsenal winners....
Copyright© 2010 The Gaea Times