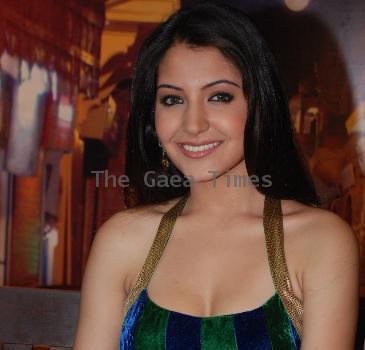 May 05, 2010 (Sampurn Wire):Anushka Sharma, who saunters in an hour and a half late for the interview tells Jyothi Venkatesh that she was not on back-slapping terms with Shah Rukh Khan as a buddy, because unlike Shahid Kapoor and Rannveer who are closer to her age, Shah Rukh Khan is older

It was not a tough transition for me. People ask me how I underwent a drastic transformation from being a conventional Punjabi girl like Tani in Rab Ne Bana Di Jodi to a mod and hip girl like Bulbul in Badmaash Company. I would not at all call it a transformation, because I have grown up in a big city like Bangalore where I have been a model and wearing modern dress is not something which is alien to me. In real life, I dress like Bulbul and not like Tani.

To what extent could you relate to your role as Bulbul in real life?

It was very easy for me to relate to the character of Bulbul because like Bulbul in the film, I too was just 15 when I had started modeling and could identify with this aspect of Bulbul. I am very close to Bulbul in Badmaash Company than Tani in Rab Ne Bana Di Jodi in real life. Like Bulbul, I too yak a lot. All that people know of me is what they had seen me in Rab Ne Bana Di Jodi as Tani. Adi knows a lot more than others, because right from the time I was doing Rab Ne Bana Di Jodi, we have been in touch. Tani is miles away from Bulbul. Both are worlds apart from one another. The image of every actor stems from the last film that they have done. It is very unfair. It would be nice if people do not have preconceived notions about the actresses and slot them with particular images based on what they see them in a film. All said and done, I do not blame people because that’s the way things work in Bollywood and you just cannot help it.

What is your role in Badmaash Company?

Bulbul is a very feisty and aggressive girl, who is pursuing her dream to be a model. What helped me was that Parmeet Sethi had character sketch for each of the four characters in the movie. I had to do a lot of research to get into the skin of my character because I was only 6 way back in 1994 and did not at all know the lingo, the dress used at that time and had a lot of sittings with my costume designer.

How was the experience of working with a new director like Parmeet Sethi?

I did not at all know who the director of the film was going to be when Adi gave me the script of Badmaash Company. Now that the film is about to be released, when I look back, I feel I could not have asked for more after Rab Ne Bana Di Jodi. Besides the fact that I am the only girl in then film, I feel that my director Parmeet Sethi has done a great job and put his vision on paper exactly the way he had visualized. What I liked the best about Parmeet was that though he is an actor on his own right, he did not bring out his actor’s thing on the sets when he set out to direct us.

In what way have you grown since Rab Ne Bana Di Jodi as an actress?

I confess that I was a new comer when Adi directed me in Rab Ne Bana Di Jodi and had no knowledge about what I was doing on the sets. As new comers, I think we tend to bring something new to the film. Every director is a good actor. I could make out that even Adi is a good actor when he used to read out a scene to me on the sets when I was shooting for Rab Ne Bana Di Jodi. I have grown a lot through just one film- Rab Ne Bana Di Jodi which has taken a lot out of me and made me what I am. I’d always be indebted to Adi for having made me an actress out of a model.

What did you learn after working in Badmaash Company?

I admit that I was protected all through the shooting of Rab Ne Bana Di Jodi. You learn every day from each film. While Rab Ne Bana Di Jodi was shot only in Mumbai, I shot for Badmaash Company all over the globe. I now know that if you develop technical skill along with knowledge of acting, it is great. Probably I knew 0.02% about technical skills when I did Rab Ne Bana Di Jodi. Now I’d say that I know 2%. I have now realised that every one is not what you are and learnt to deal with different people. While working in Badmaash Company, I learnt a lot. I also realized that every one has a different temperament though many people come together to make a film. I did not at all think like this earlier.

What is your approach as an actress?

I want every film of mine to be different from one another because I feel that otherwise it would become too monotonous for an actor to essay similar roles. The beauty of acting is that you have so many characteristics within you as an actor and hence I’d not say that it was not at all difficult for me to do the role of Bulbul in Badmaash Company. I think the time is gone when you had to look the same in film after film and play safe by clinging to your image. I am choosing different scripts now.

Which are the films you have in your kitty after Badmaash Company?

After having made my debut as Tani with Rab Ne Bana Di Jodi opposite Shah Rukh Khan, I played Bulbul in Badmaash Company with Shahid Kapoor as my leading man. Now I am playing Shruti in my third film for Yashraj Films, in which I have been teamed opposite the popular VJ Ranveer. Besides this untitled film, I play a Punjabi girl called Simran in Patiala House, which is being directed by Manish Sharma, who was associate director of Rab Ne Bana Di Jodi. Akshay Kumar is my leading man in the film which also co-stars Dimple Kapadia.

If reports in the media are to be believed, you have dumped Shahid Kapoor for Ranveer!

I think it is very cheap to link actors. I was linked with Shahid Kapoor when the film Badmaash Company though we are just good buddies. I was also linked with Rannveer who is my co-star in Yashraj Films’ latest venture. The truth is that I do not have any boy friend, because though it may sound very clichéd, the fact is that I want to concentrate on my career.

Who is your favourite leading man, out of the films in which you have acted till date?

I feel that it is unfair to ask me who I feel is my co-star since I have done only four films all my life. I can say that Shah Rukh Khan who was my first ever co-star will always remain the most special co-actor of mine all my life. He is an incredible co-actor and you can keep on listening to him the whole day, without getting tired at all. However, if you ask me whether I was on a back slapping terms with him as a buddy, I’d say that I was not, because unlike Shahid Kapoor and Ranveer who are closer to my age, Shah Rukh Khan is older and hence I cannot be a buddy as far as Shah Rukh Khan is concerned.