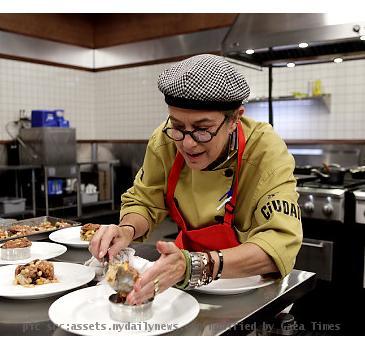 LOS ANGELES (GaeaTimes.com)- The first episode of the reality series “Top Chef Masters” was aired on Bravo last night and large number of people tuned in to watch the much anticipated pilot episode. The fact that last night’s segment of “Top Chef Masters” received extensive viewership hardly comes as a surprise given the wide popularity that the first season of the reality show had been able to receive.

The premiere episode of the second season of “Top Chef Masters” with its interesting turn of events managed to keep the viewers glued to the television screens as the much acclaimed chefs commenced their journey to win the title of the ‘Top Chef Master.’ During last night’s episode, the viewers got the opportunity to get introduced to the renowned chefs who would be taking part in the current season of the show. The show surely kept the viewers asking for more as the chefs had to impress the judges of the rock band ‘Bravery’ while competing against each other. One of the main challenges confronting the chefs was that they had to make a delicious meal with only the ingredients that were available at a gas station convenience store. The interesting fashion in which the chefs had to fulfill the job assigned to them surely turned out to be a treat to watch for the viewers.