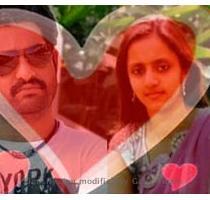 more images
HYDERABAD, INDIA (GaeaTimes.com)- Well known Telugu actor, Jr NTR got engaged to Lakshmi Pranathi yesterday, on Apr1, 2010. The engagement took place in Hyderabad, in the residence of Lakshmi Pranathi, and not at the Hotel Novotel, as had been reported earlier. Although the announcement of the engagement of the Telugu hotshot actor came as a surprise, and was treated with much incredulity by the fans of the actor. However, once it became confirmed that the actor was indeed getting engaged, and once the engagement got over, people started looking all over the internet for the Jr. NTR engagement photos.

Jr NTR got engaged to Lakshmi Pranathi, who is the daughter of the Chief Executive Officer and the Chairman of the StudioN Channel, Narne Srinivasa Rao. Only 19 years of age, Lakshmi Pranathi is at present studying for her intermediate course in Hyderabad. Jr. NTR, on the other hand, is 26 years old, and quite well established in his field. Besides the engagement, Jr NTR’s life seems to b on a roll as of now. He has his hand full with the shooting of a new film, ‘Brindavanam’, directed by Vamsi Paidipalli.

The Jr. NTR engagement took place in a very private affair at the residence of the bride-to-be. The paparazzi were not allowed inside the venue, and only after the pleasantries were over that they got any access to any of the information regarding the Jr. NTR engagement. The Jr. NTR engagement photos are reportedly available in a number of websites, and some videos of the same are also available, but not many, which is understandable, given the strict privacy code observed.