Dimple warned me that she was a tough actress who would ask me for a retake as and when she did not like my scence- V.K. Prakash 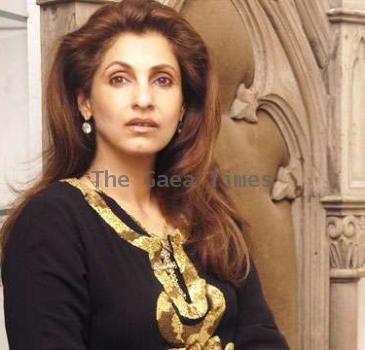 April 1, 2010 (Sampurn Wire): V.K. Prakash tells Jyothi Venkatesh that he convinced Mithun Chakraborty to let his younger son Rimoh Chakraborty play his childhood role in his film Phir Kabhi, because he felt that he could bring a rare exuberance, naiveté and inherent honesty to the character, as envisaged by him.

From Deepti Naval to Dimple Kapadia, from Sonali Kulkarni to Nandita Das, from Sachin Khedekar to Mithun Chakraborty, V.K. Prakash has directed every one. Though his latest film Phir Kabhi starring Mithun Chakraborty and Dimple Kapadia, besides Rati Agnihotri, Tinnu Anand, Gulshan Grover, Kitu Gidwani etc in the pivotal roles is his first film in Hindi as a director, V.K. Prakash is a war horse as far as direction is concerned in the sense that he had earlier directed films like Freaky Chakra in English with Deepti Naval and Sachin Khedekar and Kaviya’s Dairy (Telugu) with Mahesh Babu’s sister Manjula and Charmy as the vamps. By the way, Prakash, who had shot Sonali Kulkarni’s first ever ad film way back, has to his credit quite a few ad films.

V.K. Prakash’s maiden venture as a director was Punardivasam (Malayalam) with Nandita Das, Lalu Alex and Manoj K. Jain. Then followed quite a few Malayalam films like Mullaveliyum Thenmaavum with Kunjakko Boban, Indrajeet and Chaya Singh, Police, an action film with Prithviraj, Indrajeet and Bhavana, Moonamadhu Oraal with Jayaram, which was shot on H.D and released via the satellite, Positive with Jai Suriya, Vani and Aayilya (of the Tamil film Nadodigal fame) and last but not the least Gulumaal with Jai Suriya, Kunchako Boban and Mitra Kuriyan.

Phir Kabhi is literally a triumph of sorts for V.K. Prakash. “The Malayalam writer Sindhuraj has written Phir Kabhi. It is a poignant film which deals with a mature story of love between two senior citizens who are in the prime of their lives. It is interesting to note that Mithun’s younger son Rimoh is making his debut with this film. I convinced Mithunda to let his younger son Rimoh play his childhood role, because he fitted the part and could bring a rare exuberance, naiveté and inherent honesty to the character, as I had envisaged when I wanted to make the film. It was quite tough to make a sensitive film like Phir Kabhi, because distributors do not come forward to release a film like this which does not fall in the gambit of their masala movies.”

Prakash was keen on making Phir Kabhi though Sindhuraj, the writer suggested that he set out to make the Hindi remake of his own earlier action hit in Malayalam- Puthiya Mukham, the Hindi remake rights of which incidentally actor-producer Ajay Devgn had bought subsequently to make with Rohit Shetty. “I did not find the prospects of making Puthiya Mukham in Hindi exactly exciting and opted to make a slice of real life film like Phir Kabhi. Thankfully Pradeep Guha and a production house like UTV came forward to buy the film though they have yet to release the film for reasons best known to them.”

Prakash is made of different stuff as a filmmaker. While n one hand he says that he does not have any reservations about making real slice of life films like Phir Kabhi and Punardivasam, which are very close to life, on the other hand as a filmmaker he does not mind rising to the occasion when it comes to catering to the audience who clamor for larger than life films like Gulumaal, which was an out and out comedy too. Prakash says that as a filmmaker, he has been tremendously inspired by stalwart filmmakers like Guru Dutt, Bimal Roy etc, as well as living legends like Shyam Benegal and Basu Chatterji who continue to make films which are different. Prakash’s favorite filmmakers as far as Malayalam Cinema is concerned are Adoor Gopalakrishnan and Sibi Malayil.

Working with Mithun Chakraborty and Dimple was a learning experience for him since both grasp what the director wants and translate his vision in a jiffy in front of the camera when it starts rolling. Prakash recalls that Dimple had even startled him by ragging him when she agreed to do his film by telling him that she was a tough actress and would ask him to reshoot anytime she did not like the way he shot his scene.

Prakash recollects fondly that both Dimple and Mithun went out of their way to co-operate with him and he could complete his film in around 31 days. Though when the film went on the floors, Dimple did not ask him for retakes, to his great relief, she confessed to him one day on the sets that she had told him that she may ask him for retakes only because Mithunda was a one take artiste and she did not want a take to be okayed by Prakash, if she inadvertently ended up goofing it.