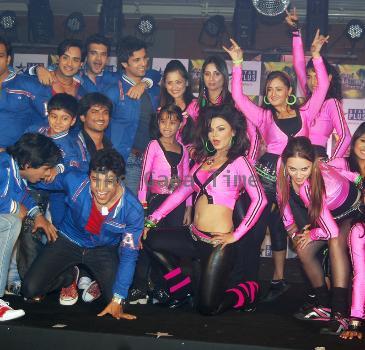 April 1, 2010 (Sampurn Wire):‘Zara Nachke Dikha’ season two is almost ready to surface on small screen as it has now shifted from Star One to Star Plus. Talking about the show, Monika Shergil (Creative Director) says, “We have shifted the show from Star One to Star Plus just because we have got a larger response from the audience for last season and thus we thought of changing the channel for more such responses. And also the channel is launching the show taking up big stars and on a super scale.”

‘Zara Nachke Dikha’, (by Sol Productions), is the ultimate clash of sexes promising viewers a high voltage entertainment with mix of dance, fun, masti, drama and lot more, with an unprecedented razzmatazz of celebrities fighting it out in the ultimate dance battle of superiority.

Here is the final list of celebrities participating in the show:

Having look at these celebrities, one thing is certain that we expect lot more drama on the show as nine sensational maskalis and nine machos mastkalandars are set to bring the dance floor alive with their grooves, in a bid to establish the clear leader between boys and girls. The show will move beyond dance as one of the rounds will have the contestants competing against each other through fun, physical games.

So viewers, till now you have seen your tele-stars making you shed tears but now get ready to enjoy their moves on ‘Zara Nachke Dikha’ coming soon only Star Plus!