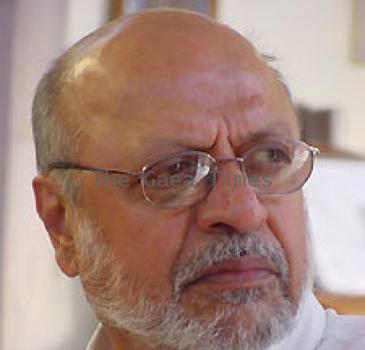 March 24, 2010 (Sampurn Wire): Shyam Benegal tells Jyothi Venkatesh that his ambitious Indo-Sri Lankan project Buddha has been put on the backburner, thanks to International recession which has taken a toll on the project.

How relevant is the title ‘Well Done Abba’ to your film?

I am of the opinion that any title refers to a film in one way or the other. Well Done Abba is what a child tells her father. The relationship between the father Armaan Ali and his daughter Muskaan constitutes the intriguing point of the film and offers to the viewer, a direct connection with the film itself. When my line producer suggested the title, I readily accepted it.

What exactly is the premise of your film?

The premise of my film is very simple. The film is about a driver of an executive in Mumbai who takes leave for a month to get his daughter married. He gets caught up with various other things and comes back to Mumbai after three months. When his boss threatens to sack him, he starts telling him about what happened in the three months. It forms the crux of the film. Well Done Abba is hilarious at one level and touches you at another. It is a political satire, though the approach is comical. It is a happy comedy with a touching story.

Has your approach as a director become more linear with ‘Welcome To Sajjanpur’?

You choose a subject. Some subjects lend themselves to comic treatment whereas some need a serious approach. The form dictates the content depending on whatever subject you have. I have always believed that the content is of primary importance when you set out to make a film. You should also remember that over the years, ever since I had made Ankur, ways to connect with the audiences have also changed because the younger audiences is much exposed to the media today. Today’s audiences are much more willing to accept even films which are not conventional. This, in turn, has given a huge boost to creative kind of film making.

What kind of a relationship do you generally share with your actors?

As a director, I enjoy working with all my actors, because I feel that they are the life and blood of every film that you set out to make. It does not matter whether the actor is new like say Minissha Lamba or an established one like say Shabana Azmi, Naseeruddin Shah or for that matter Ila Arun.

Why do you give preference to making films with the rural backdrop?

What is the USP of Well Done Abba?

The story and the performance are the USP of the film. This along with the music by Shantanu Moitra, who has to his credit as a music director films like Lage Raho Munnabhai and Parineeta besides my Welcome To Sajjanpur, .

Do you drive home any subtle message to the audiences with Well Done Abba?

In the garb of a political satire, I have set out to drive home the message that you need integrity to run good schemes which are initiated by the government for the people of the country or else those very schemes run the risk of becoming scams.

Was Boman Irani the first choice for your film?

Correct casting is the most important factor when you set out to make a film. It is not important whether the actor is the first or the second choice for the film. Boman is a very good actor with a wide range. What I like in Boman is his versatility, commitment, passion and discipline. Besides the fact that he fits the age of the part in Well Done Abba, Boman is also adept enough to sing and dance and is also versatile enough to do a comedy scene or a tragedy. I am glad I cast him in my film. I wonder who else would have fitted the bill in case he had not agreed to act in my film.

In what way has your transition from ad films to feature films helped you as a director?

If you come from a background of ad films, you have a greater control over the medium. Economy of cinematic expression is of essence. If you can say in just one single sentence what other directors take a paragraph to narrate, your work will be appreciated, like R. Balki and Raju Hirani. More than even a stint in TV, your experience in ad films teaches you brevity as a filmmaker.

Why is there a lull as far as making serials is concerned, after Bharat Ek Khoj and Katha Sagar?

Cinema is larger than life and uses a lot of space whereas people feel that TV is smaller than life. I feel that relationship with time and space is different on TV, for the simple reason that you tend to lose all details on TV. As a filmmaker I should get challenged to make any project, whether it is a film or for that matter a TV show. If a TV project is not as challenging as Bharat Ek Khoj or Katha Sagar, I am not game to do a TV show. If I take the easy way, I may just end up as yet another run of the mill director.

Is it true that you are averse to making films with big stars?

It is not true that I shy away from making films with big stars. I did make Junoon and Kalyug both with Shashi Kapoor. I cast Karisma Kapoor in Zubeida. If I set out to do a big film, it requires actors and it is risky to take stars because they are like magnets. If I do not recover the money that the producer has invested in my film in which I have cast stars, the stars would be wasted. I feel that if I cast stars, it should work well for both the film as well as the stars who I have cast. As a filmmaker, you cannot do anything that takes the stars away from their stardom.

What has happened to your ambitious Indo Srilanka project Gautam Buddha?

It has been put on the backburner, because International recession has taken a toll on the project.

Does your approach as a film maker change with every film?

Yes. My approach as a director keeps changing. With each new film of mine, I try some new story telling. I do not like to repeat myself. I change the style of narration with every film of mine. It is crucial that I should like a film when I set out to make it. You would be ignorant if you do not know the lifestyle of the Muslims in a country like that of ours and hence you have to keep your mind open and not be prejudiced when you set out to make a film with Muslims characters like I have done with Well Done Abba. It is a fruitless occupation to try to know what will sell and what will not, because sensibilities differ in the audiences the world over and it is difficult to pander to the lowest common denominator.