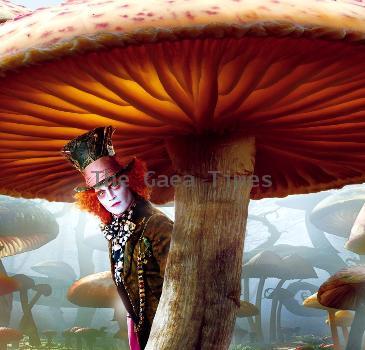 This quasi-sequel to the original Alice in Wonderland novel concerns a 20-year-old Alice (a terrifically low-key and deviously seductive Mia Wasikowska), on the precipice of accepting an unwanted engagement to a connected young-gentleman. At the moment of said proposal, Alice is distracted by a strange anthropomorphic rabbit that seems to be gaming for her attention. History repeats itself and Alice again tumbles down the rabbit hole into the magical world of ‘Underland’. But Underland is now a desolate, fire-scorched world ruled by the Red Queen (Helena Boham Carter). Alice does not remember her previous trip when she was a wee child, but apparently it is her destiny to return and make things right again. The characters she meets are certainly eye-catching. The White Rabbit (voiced by Michael Sheen) percolates with antic charm, and Tweedledum and Tweedledee (Matt Lucas) are fleshy twins. The Cheshire Cat, with electric blue stripes, is voiced by Stephen Fry in drolly amused dry-sherry tones. Then there’s Johnny Depp, who plays the Mad Hatter with multicoloured eyes, an exploding Bozo carrot top, and a gaze of luminous dementia. He’s a fantastic image, but once Depp opens his mouth, what comes out is a noisome Scottish twang that makes everything he says sound more or less the same. Depp’s counterpart in shrill sameness is Helena Bonham Carter. Unfortunately, Anne Hathaway is miscast as her sister, the White Queen, as her white hair and black eyebrows look weird and she’s not temperamentally suited to the role’s benign arrogance.

Tim Burton, with his crazy love for rabbit-hole alternative worlds (Beetlejuice), baroque oddballs (Batman, Edward Scissorhands), and kiddie fables told with a cynical wink (Charlie and the Chocolate Factory), would seem to be the perfect director to adapt Carroll’s legendary tale and make a memorable, zany-dark movie out of it. But Burton’s Disneyfied 3-D Alice in Wonderland, written by the girl-power specialist Linda Woolverton (Beauty and the Beast), is a strange brew indeed. It is murky, diffuse, and meandering, set not in a Wonderland that pops with demented life but in a world called Underland that’s like a joyless, bombed-out version of Wonderland. It looks like a CGI head trip gone post apocalyptic. In the film’s rather humdrum 3-D, the place doesn’t dazzle — it droops. The 3D conversion actually works best in the real-world prologue and epilogue, when it creates a genuinely immersive experience. But once the picture descends into fantasy, so much of what you see is so obviously fake, that you can’t believe your eyes no matter what dimensions the image is in.

The 3D is not terribly distracting, but it adds very little to the experience and is probably a large part of why the film’s colors seem so muted and pale. Quite frankly this one can be enjoyed far well in a 2D screen.