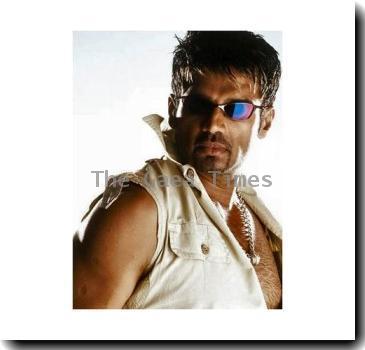 February 24, 2010 (Sampurn Wire): The sports event at Chandigarh on Saturday touted as the ultimate teaser before the world Cup matches, ended up being a damp squib when representatives of our film industry who were supposed to attend were asked to stay away by the organizers.

Dharmendra, Sunny Deol and Bobby Deol who were shooting in nearby Patiala and were expected to attend, cancelled at the last minute.

Protests Sunil Shetty, “It was not Dharamji’s fault at all. He was all set to travel from Patiala to Chandigarh when the organizers informed him not to come because of the chaos that happened over the money the hockey players demanded. I was also told not to come. But I didn’t listen. And I’m glad I went. There were 30,000 expectant people in the stadium at Chandigarh.”

Sunil Shetty, who champions the cause of our national sport hockey, wants Rahul Gandhi to step into the arena and save the sport.

“Only Rahul Gandhi with his initiative and youth power can rescue hockey from the doldrums. Otherwise the game is doomed.”

Sunil intends to put forward an appeal to Rahul Gandhi on behalf of the hockey federation urging the young Congress leader to bring an impetus and sense of direction to the game.

The fiasco on Saturday at the sports event hosted in Chandigarh by the AMR Sports Foundation where the National hockey players apparently asked for Rs 5 crores at the eleventh hour to play at the event, has not left Sunil disillusioned or discouraged

Says Sunil, “See, what happened in Chandigarh was really sad. I don’t know what happened between the event’s organizers and our boys from the National hockey team. If they really asked for the money then they shouldn’t have. But think of it from their point if view. Hockey players in our country are still so underpaid. They’re under so much pressure from their family to give up hockey and do something more paying. How long can our players withstand the financial pressure?”

Sunil feels every sport in this country barring cricket is in a shoddy condition. “Look at the way our world-class sport-persons like Abhinav Bhindra are treated! It’s a shame. We really need to respect sports and sportsmen other than cricket. Otherwise with the Al Qaida telling the international sports community to stay away, kya fayda? Hockey humne haan ki ya na ki? We keep forgetting we have a hockey World Cup coming up. And we cannot allow our hockey players to be demoralized in this way. Like I said we need Rahul Gandhi to step in.”

Looking at the brighter side Sunil is pleased that the hockey team from the Indian film and television industry played against a local Chandigarh hockey team on Saturday.

Says Sunil, “It was a goodwill match. But we need to take hockey much beyond goodwill now. The hockey federation needs a capable President…and hockey needs Rahul Gandhi.”