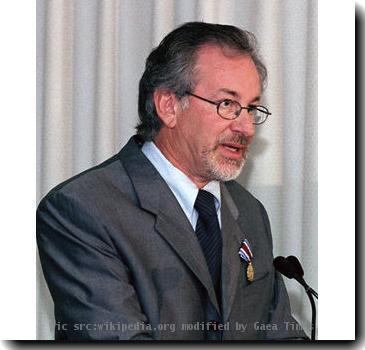 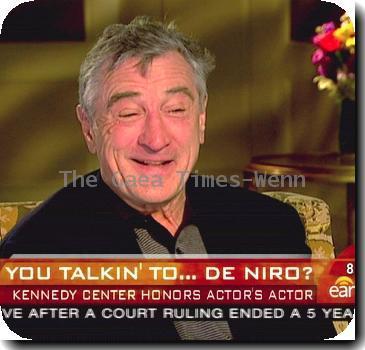 In presenting Martin Scorsese with the Cecil B. DeMille Award for lifetime achievement at the Golden Globes, his longtime friend and collaborator Robert De Niro found a new way to describe the director’s famous, obsessive love of cinema.

“Marty sleeps, drinks and eats film,” De Niro said. “I hear there are videos on the Internet of Marty having sex with film.”

Such honors have become somewhat old hat for Scorsese and De Niro. De Niro — who has apparently learned a thing or two from the plethora of comedies he’s made in recent years — joked that after 20 years making movies together, they’ve spent the last 10 “presenting each other with awards.”

“We’re like an old married couple,” said De Niro. “We built a life together, we have great memories — we just don’t sleep together anymore.”

But De Niro’s finest line might have been wondering if the award was perhaps lesser than the man: “I can’t help thinking if times were a bit different, how proud Cecil B. DeMille would have been to be honored with the Martin Scorsese Award.”

Taking the stage to a standing ovation at the International Ballroom of the Beverly Hilton Hotel in Beverly Hills, Calif., the veteran director acknowledged that “Goodfellas” didn’t seemingly have much in common with DeMille’s “The Greatest Show on Earth.”

“When I got to make my own films, no matter what they looked like, the overall intention was always to tap into the powerful cinematic experience that characterized a DeMille picture,” said Scorsese.

He applauded “the big show, the spectacular” of DeMille’s extravagant films, saying they were “the shared landscape of our childhood.”

Only Scorsese would turn such an award into a tribute to its namesake.

Scorsese is a well-known film preservationist and he helped release an acclaimed new copy of Michael Powell and Emeric Pressburger’s 1948 classic “The Red Shoes” this year. He founded the Film Foundation in 1990 as a nonprofit organization dedicated to preserving films.

He thanked the Hollywood Foreign Press Association, which puts on the Globes, for its continued support and contributions to film preservation.

“As William Faulkner said, ‘The past is never dead, it is not even past,’” said Scorsese. “As far as I’m concerned, making films and preserving them are the same thing.”

Leonardo DiCaprio, who joined De Niro in the introduction, called Scorsese “a master filmmaker and a generous, patient teacher,” whose name defines cinema.

Though Scorsese’s 2007 Oscar win for directing “The Departed” was a long time coming, he has had better success at the Globes, previously winning two Globes for best director, for “The Departed” and 2001’s “Gangs of New York.” He was nominated six other times.

While the 67-year-old Scorsese was being honored for a lifetime of work in cinema, he’s as active as ever. His latest film, “Shutter Island,” a thriller starring DiCaprio, will be released Feb. 19.

He is also executive producer of the HBO series “Boardwalk Empire” with “Sopranos” writer Terence Winter. The series, out later this year, stars Steve Buscemi and chronicles the 1920s gangland of Atlantic City.

Recent winners of the Cecil B. DeMille Award include Steven Spielberg in 2009, Warren Beatty in 2007 and Anthony Hopkins in 2006.