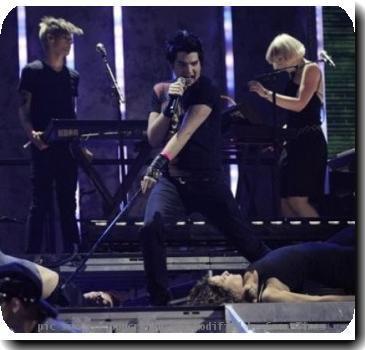 Awards show stages have been the site of some of the most memorable and controversial performances in recent years. Lambert closed a night of eye-popping performances with a few sights that have likely never been seen on the AMA stage. Wearing a silvery suit, with spikes on his left shoulder, he dragged a woman across the stage and danced with her.

Adam Lambert , American Idol runner-up, performed his new single “For Your Entertainment” with numerous backing dancers. Those dancers would turn into his personal love slaves. Chains, vulgar grinding and kissing were all apart of Adam’s debut performance. The singer even planted an intense smooch on one of his keyboardists.

It seems that the 27-year-old singer has kept his promise to give a sexy and excited performance. His rocking performance take the audience to the edge, although some controversy remain there.

Watch out the video of Adam Lambert performance at AMA