Hera Pheri to get part 3 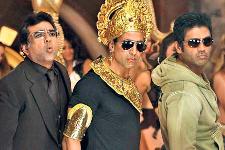 Producer Firoz Nadiadwala is relieved. The third part to the Hera Pheri series is finally set to be made.

The third part will have Akshay Kumar, Sunil Shetty and Paresh Rawal coming together yet again. This time, the heroine of the film will be Katrina Kaif and it will be directed by Anees Bazmee, unlike the previous two films that were directed by Priyadarshan and Neeraj Vohra respectively. The film will be called Hera Pheri 4 instead of 3. The reason for doing so will be given in the promos of the film when it is ready.

Akshay Kumar was earlier having date issues but he managed to fit in Hera Pheri into his schedule anyhow. Meanwhile, he is going to be seen with Sunil Shetty and Paresh Rawal in De Dana Dan.