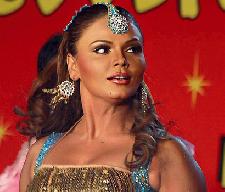 Rakhi Sawant is appalled and angry by the way her mother is being treated on Bigg Boss. She wants revenge.

“How dare the Channel use my mother as a pawn? Last year it was Rakhi Sawant. So this year it’s her mother? I could take on the whole house. Let them send me into the house once. I’ll show all these English-speaking snobs what a daughter can do when her mother is insulted. No one can fool around with me. But my mother is a simple housewife. That poor woman is being completely isolated by the other contestants.”

And Rakhi, though not on talking terms with her mom, won’t take any slight to her lying down. “How can they isolate her because she can’t speak English? We come from the chawls. My grandfather never sent my mother to school. She is a poor uneducated housewife. I wonder how she put those two signatures on the Bigg Boss deal because she can barely sign her name.”

Rakhi is especially upset with Tanaaz Currim. “Tanaaz is behaving extra-smart. When the housemates did the Mummy-Daddy act, Tanaaz completely ignored my mother. And do you know, when I meet Tanaaz’s mother I’m very polite and respectful?”

Rakhi blames the channel for using her mother as bait. “They thought Rakhi is coming on ‘Pati Patni Aur Woh’, so let’s put her mother on another show. I had no idea my mother was invited to Bigg Boss. Whatever our personal differences I don’t want my mother to be put in a compromising position,” says Rakhi and accuses the other housemates for discriminating against her mother.

“There’s definitely bhed-bhav against my mother. Nine contestants voted her out on the second day. I’m frantically calling up all my friends and fans to vote for my mother,” says Rakhi who has just bought herself an office in Lokhandwala.

“It’s in the Kamdhenu complex. I’m very proud of it. From there I’ll start my production house. Whatever money I’ll make on the reality shows I’ll use to produce my serial on the Bible. As it is I’ve realized movies don’t pay. I got only a token amount from Yashraj Films for Dil Bole Hadippa. And on the top of that, my role and my dances were cut drastically. So why should I not do television where I’m the queen?”