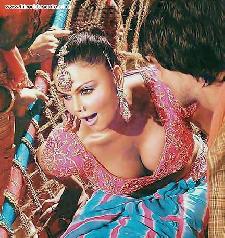 Can you guess of whom we are talking about? Well its non other than controversial queen Rakhi Sawant. The actress is essaying a good role in the up coming flick Dil Bole Hadippa.

“I portray the character of Shanno who is a big nautanki. She is bindaas and a different but strong girl. I had a great time shooting with Rani and Shahid in the film. There is also a dance sequence where Rani flirts with me in a song,” says Rakhi.

There is Sherlin too in the movie so was there any competitive environment for you? “My competition is with the biggies of the industry like Ash, Kareena and Rani Mukherjee not with small time actress,” she stated in an interview with an entertainment channel.

You have done an item song too in the film. “Yes it was with Rani as I said earlier and we had a gala time while shooting it,” she concludes.