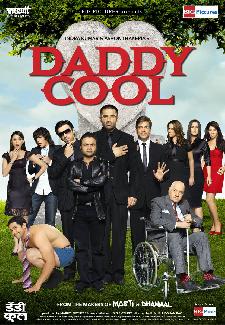 Daddy Cool: The uncoolest movie of the decade

Steven Lazarus (Sunil Shetty) loses his father Douglas (Sharat Saxena) and a funeral is arranged at his sprawling villa in Goa. While Steven had planned a decent funeral, all hell breaks lose with quirky guests trickling in one by one. Be it his self centered novelist brother Brian (Ashish), his cousin sister Maria (Tulip) with her boyfriend Michael (Aftab) who gets mistakenly doped because of her brother Harry’s (Chunkey) pills, henpecked hubby Carlos (Jaffrey) with his forever suspicious wife Jenny (Kim), a fouled mouthed uncle Murphy (Prem Chopra) and a wannabe model Ayesha (Sophie) who arrives at the wrong place at the wrong time. Adding to Steven’s woes is his wife Nancy (Aarti) who has invited an estate agent Pinto (Vijay Patkar) so that he immediately books a new flat for them. A suspicious visitor, Andrew (Rajpal) intrigues Steven. He is further left shell shocked on Andrew’s revelation that he was his dead father’s gay lover. Andrew demands big money to keep this a secret. What mix ups and chaos follows it and how it all leads to a bigger mess forms the rest of the plot.

The makers have already made it clear that it is an official remake of the British comedy Death at a Funeral but in trying to stick too close to the original, the humour doesn’t work every time. Lot of unnecessary characters like that of Vrajesh Hirjee are given unwanted extra screen time and abundant use of toilet (literally) humor leaves a bad taste in your mouth. Imagine Prem Chopra shitting on Javed Jaffrey’s hands and he brandishing it on screen. YUCK!! Aftab’s doped out act appears funny initially, especially when he meets Sunil Shetty’s mom and smooches her. But then it all gets repetitive and boring. The emotional moments at the end, appear forced. The film is supposedly set in Goa but appears to have been shot in Mumbai and surrounding areas. It also constantly gives the feeling of watching a play as most of the things happen in the same house.

Sunil Shetty stands out with his act, he is superb when he gives the final speech at the climax. Aftab is fun in the beginning but begins to irritate. Javed Jaffrey is good but Ashish Chowdhary carries the same arch browed expressions throughout the film. Chunkey is fun and so is Vijay Patkar. Rajpal has his moments. Vrajesh Hirjee makes you wish he was better off in the dead man’s coffin instead of grating on our nerves whenever he comes on screen. Sophie reveals her body freely but not her acting talent. Kim Sharma, Tulip and Aarti Chabbria are not bad.

Daddy Cool is like an extended joke that goes on and on and doesn’t make you laugh as was intended. There is simply nothing cool about it! Its better we wait for the American remake of the film that’s due to hit next year starring Chris Rock, Luke Wilson and Martin Lawrence.